Melbourne At Night Under COVID-19 Curfew 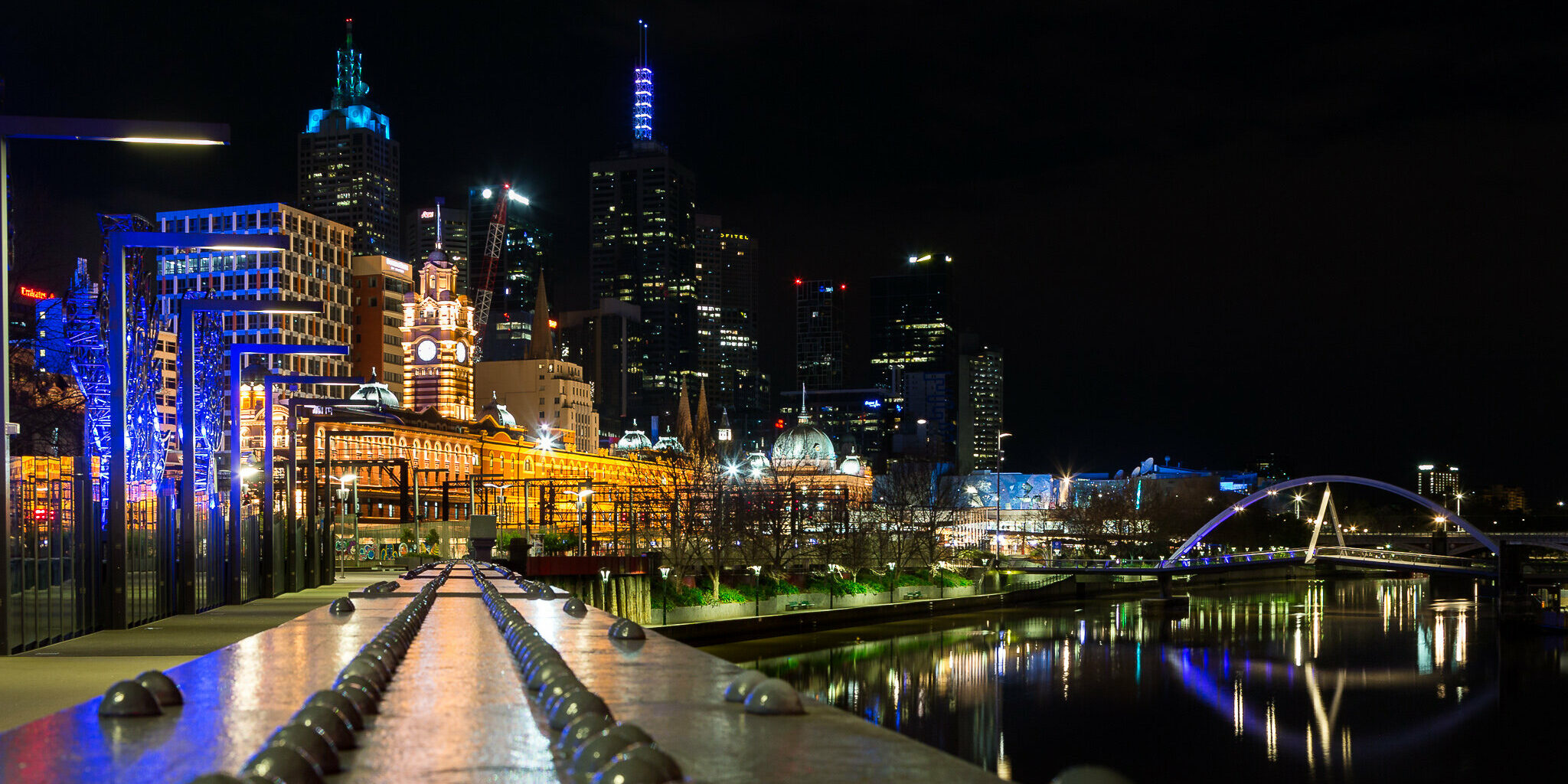 I’m sure that most of you have seen the classic images of Melbourne (or whatever city you’re from) during the COVID-19 crisis. Empty streets as far as the eye can see, evidence of human inhabitants rarer than The Yangtze Finless Porpoise. And that’s saying something.

For those who do not live in Melbourne, or even Australia, the State of Victoria has been suffering through Stage 4 COVID lockdowns for six weeks now. They are apparently the second strictest lockdowns the world has seen throughout this crisis, second only to China I would guess, but don’t quote me on that. What I do know is that they are strict, real strict. We cannot leave our house except to buy food or seek medical attention. We are allowed only one hour a day of exercise outside, and no more than 5kms radius from our home. We are not allowed to work and most industry has been closed down. We have a curfew from 8pm to 5am. Our state borders are closed, Children banned from seeing their dying fathers or mothers, banned from their funerals. Boarding school kids, 13 years old, banned from going home. School banned. Others denied proper medical care and the list goes on.

Our state government has cancelled parliament, extended their special powers that give them the right to arrest us, enter our homes without a warrant and essentially act as a political police force. They’ve now begun arresting people for their Facebook posts. We are not provided any data, or modelling, or metrics that will trigger further measures, we don’t know the numbers that will see us soften lockdowns and when anyone asks for any of it, they’re mocked and treated as outcasts. There’s no plan, but we have at least been promised one next Sunday. All expectations are that we will see these lockdowns extended.

So what does a city under curfew look like? Well if you’re not a working photographer, I wouldn’t suggest wandering into the CBD to find out. I was stopped by police 4 times in a three hour period. I had to show ID my work permit and all was fine but if I didn’t have my permit, I would have been fined $1,600 each time.

After arriving into the CBD I was confronted by a police checkpoint. The car in front of me had 4 your passengers and after a few minutes of questioning, they were pulled aside and each fined for being outdoors for an unlawful reason. My turn came and after giving the Naval Officer (Military have been deployed to enforce these laws) my ID and work permit, he happily waved me on.

A few minutes later I arrived at Flinders Street Station (pictured above). This station is the second busiest in Australia with around 28 million passengers flowing through every year. The station operates 24 hours a day and in ordinary times, is always busy. During curfew though, it is a ghost town.

Moving on to my next location, I decided to take a look at some of the busiest parts of the city, Swanston Walk and Bourke Street Mall, which I will get back to shortly.

I didn’t have to go far, Swanston Street was directly behind me so I turned around to a get good view of the activity or lack there off in this once great city of ours.

Almost exclusively consisting of 24 hour cafes and some retail outlets, Swanston Street never sleeps. But as with the rest of Melbourne, it’s dead empty.

Before we head off to Bourke Street, I wanted to check out St Kilda Road. This road is the main road that connects the CBD to St Kilda. These days its been absorbed by the growing metropolis and is flanked by a mix of office, residential and mixed use towers. It also carries some of the city’s busiest tram networks.

Below is a view of the road, seen from the south side of The Princes Bridge looking southward towards The Shrine of Remembrance. At this point, I’m standing perhaps 150 meters down the road from the Station. Never before I have I seen it like this, devoid of trams, cars and taxis. As you can see, there is literally nothing there. Not even a tumbleweed.

After taking in the surreal environment, it was time to walk back to my car and make my way to Bourke Street and my second encounter with police. This time they pulled me over to check my papers, all was in order so I was on my way again.

Knowing that Bourke Street is predominantly retail and would ordinarily be quiet on a Tuesday night, I expected it to be quite, but there is still usually a reasonably high level of people moving around, waiting for trams or just killing time.

I’ve planned this shot for a long time actually, it’s just an added bonus that I managed to get it under curfew because my chances of being run over by a car or a tram is near guaranteed in normal times. I have too much life left in me and that didn’t appeal at all.

The Mall section of this street sits at the bottom of a small valley. Looking from Parliament House, the road travels downhill to the beginning of the Mall where it is flat and then continues on uphill. My plan was to use a very long lens to take advantage of the compression that long lenses offer. I was hoping to give the impression that the gentle upward slope of the street was vertically rising into the heavens. I almost got there, but perhaps I needed a longer lens, maybe I should have located myself further away. I’m not sure but either way, I’m still happy with the look I achieved and more importantly, once again, the street was deserted as you can plainly see from the image below.

For the photographers reading this, most of these images were taken on a tripod (of course) with an exposure of 20 to 25 seconds at f16. There are a couple where I took two or three different exposures at different lengths to blend later in photoshop so I could pull detail out. For Bourke Street, I opted to use a Canon EF 200-400 f4L IS USM 1.4 EXT with the lens extender switched on, giving me an equivalent of 580mm. All photos were taken with a Canon 1Dx full frame body.

Ironically, I perched myself outside of a busy police station. As I sat there, in the middle of the road, about 20 police came and went and none of them took any interest in me!

Time to move on and leave the CBD and take a look at St Kilda. Back in the car and this time, a quick drive down the empty St Kilda Road and a quick stop to take an image of one of the tram stops near St Kilda itself. See below…

Time for a bite to eat now but everything is closed. What was open was only taking phone orders for home delivery but thankfully there was a place in St Kilda that was happy to make me a pizza and a coffee. And that’s when my third encounter with police took place. I was quietly eating dinner in the car in Middle Park, just down the road from St Kilda and they pulled up behind me… but as was the case before, all was good when they saw my papers.

So there were two more locations I wanted to check out – Fiztroy Street St Kilda, known for its restaurants and cafes and usually swarming with thousands of locals and tourists. But during curfew here’s what it looked like:

I didn’t really know what to expect when coming in to town, it was the first time curfew has been forced on Australia in its history and my first time shooting under curfew. I’m grateful for the experience as it will be a story I will take to my grave. But my heart aches for the pain and suffering this whole pandemic is bestowing on us. It will take years to recover and the once great city of Melbourne, known for its food and coffee and nightlife, will take years to recover to anything like it used to be.

Oh, and on the way home, I was yet again stopped by police for a fourth time. Don’t risk going in to see the city like this, you are guaranteed to be caught.